There are conflicting stories and information behind Mikao Usui and the founding of Reiki, but based on the research of my Reiki Masters, and information passed down to them by theirs, here is the history as we know it to be.

Born as a Buddhist monk into a Japanese samurai family in 1865, Mikao Usui went on to study many religions and belief systems. While teaching, his students once asked him why they had never been taught any healing methods that Jesus had once shown his own students — Usui didn’t have the answer.

He decided to go on a journey to gain knowledge. It’s said this led him to America, Europe and China. He researched many texts for the answers around hands-on-healing. Usui was able to read Japanese, Chinese and Sanskrit. Mikao Usui also is said to have traveled to North India where he began to study the Holy Writings.

Upon returning to Japan he discovered some Sanskrit formulas and symbols from the old Buddhist Sutras which provided him with the answers. Through meditation — which he had been practicing most of his life — based around what he had discovered with the Sutras, what is now known as the system of Reiki was revealed to him, including the symbols used within Reiki.

The Japanese translation for the word Reiki means spiritual, or sacred, energy. Usui Reiki represents the universal life force of energy. It is known as an activator, releaser and transformer of subtle energies. It can bring harmony, wholeness and balance. The energy is a facilitator for spiritual connections and enlightenment.

Reiki is a hands-on-healing method and can be used on people, pets, trees, plants, crystals and so much more. It is also very useful to bring forth positive healthy energy into the home, or even nature, replacing negative and any energy that doesn’t belong.

Reiki has been known to help with pain relief, increase healing of wounds, aid with chronic or acute illness, strengthen the immune system, de-stress and calm the mind, enable clarity, stimulate the right brain, balance one’s feelings, ease depression and insomnia, help stop addictive behavior and fear based conditions, boost self confidence, clear the energy in the body and aura, stimulate intuition, provide an enhanced sense of connectedness and oneness, and soothe and nourish the soul.

Hawayo Hiromi Takata is the third Reiki Master in everyone’s lineage today. She was trained in Reiki by Dr Chujiro Hayashi, who learnt Reiki directly from Mikao Usui, the founder of Reiki. While Takata was born in Hawaii, she was trained in Japan and is sometimes referred to as the Reiki Grand Master Teacher.

On may 17th, 1975, an article based around an interview with Takata was published in The Times newspaper in California, USA. This interview helps to provide additional insight into what Reiki is really about. 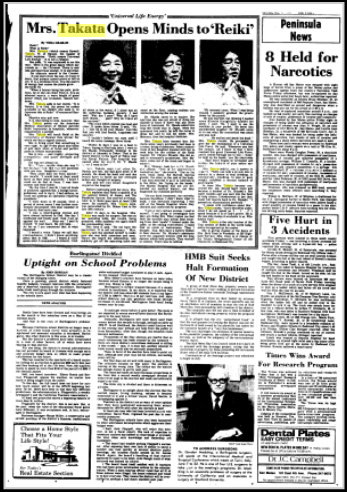 “Reiki? What is Reiki?

Mrs. Hawayo (which means Hawaii) Takata, 74, of Hawaii, the master of Reiki, explains: “Reiki means Universal Life Energy.” It is not a religion. She adds, “It was explained to me this way: ‘Here is the great space which surrounds us — the Universe. There is endless and enormous energy. It is universal. Its ultimate source is the Creator. It can stem from the sun, or moon, or stars; that science cannot prove, or tell us, yet. It is a limitless force. It is the source of energy that makes the plants grow… the birds fly.”

“When a human being has pain, problems, he or she can draw from it. It is an ethereal source, a wave length of great power which can revitalize; restore harmony…” Mrs. Takata adds in her word, “It is Nature. It is God, the power He makes available to His children who seek it. In Japanese, this is Reiki.” (Pronounced Ray-Kee)

It is interesting to note, however, that Mrs. Takata points out the American Medical Association of Hawaii permits Reiki treatments in hospitals, whenever requested by a patient. Mrs. Takata will teach Reiki at the University of Hawaii this winter, for which she has a signed contract. She is living proof that something is very right. At age 74, she plays nine holes of golf daily when at home, and participates in 18-hole tournaments. She is tiny — and mighty! Projecting tranquility and quiet strength and power. She was not always so.

Mrs. Takata recalls when she was 29, her husband died. She was left penniless with two small daughters to rear. “They alone kept me from suicide,” she recalls. “I would look at their small faces as they slept peacefully. I knew I could not do that to them. I was their mother and their father.”

“By the time I was 35, I had all kinds of ailments: appendicitis, a benign tumor, and gallstones. And to top it, I had asthma, so could not undergo an operation requiring anesthetic. I went down to 97 pounds. Over a period of seven years, I was further emotionally devastated. One dear member of my family died each year. I was a church-going woman, and have always believed in God. One day, I meditated, and finally said, “God, I am up against the wall! Help Me! I said to myself, “If God hears, He will help.” As far as I am concerned, that is what happened.”

“I heard a voice. Today, we call that clairaudience. I didn’t know anything about that in 1935… I heard a voice speak after I complained so bitterly. I felt all alone in the world; as if I alone had all the suffering, burdens, and poverty. I had said, “Why am I poor? Why do I have such illness…. pain? Why do I have all the sorrows? The voice which replied was loud and clear. It spoke three times. It said, “Number One: Get rid of all your illness.’ Just like that! “You will find health, happiness, and security.” I couldn’t believe my ears until I heard the same message three times. Within twenty one days, I was on a boat to Tokyo, hoping to find help there. I went to the Maeda Orthopaedic Hospital in the district of Akasaka in Tokyo. That is the finest district in the heart of Tokyo near the Royal Palace. The hospital was named after my friend, Dr. T. Maeda, whom I went to see.”

Mrs. Takata says that when Dr. Maeda saw her, she had gone down to 97 pounds. He shook his head, and said she would have to build up her strength before any thought of surgery. She and her two small daughters stayed at the hospital.

Before continuing with her story, Mrs. Takata explains that Reiki is spoken of in the ancient history of Japan, and in the Buddhist Sutras, the sacred writings refer to it. Reiki goes back at least 2,500 years. Its mystery, Mrs. Takata says, was unraveled by Dr. Mikao Usui in the late eighteenth century.

After twenty-one days in the hospital, Mrs. Takata was ready for surgery. She was on the operating table, she recalls, being prepared, when suddenly she again heard the commanding voice. This time, it said, “Do not have the operation. It is not necessary.” Mrs. Takata said she pinched herself, to make sure she was both conscious and sane. Thrice she heard the admonition, and suddenly got off the operating table and stood on the floor, causing endless consternation among the nurses.

Dr. Maeda came in to inquire. She told him she was not afraid of dying, but wanted to know if there was any other treatment. Dr. Maeda asked how long she would stay in Japan. When she answered, two years, he told the nurses to dress her, and to call his sister, Mrs. Shimura, who was then the hospital dietician.

Mrs. Takata later learned that Mrs. Shimura had, some years previously, been in a coma, dying of dysentery, when a schoolmate of her daughter pleaded with her to seek help for her mother, from the Reiki Master, Dr. Chijuro Hayashi. She did so, and to everyone’s amazement, Mrs. Shimura came out of the coma and began to recover. Mrs. Shimura took her to Dr. Hayashi’s offices. “Two of his practitioners worked on me,” she recalls. “One on the eyes, head, sinus, thyroid, thymus glands. The other, on the rest of the body. I can best describe it as it is referred to in the Bible: the laying on of hands.”

The Maeda Hospital is where they checked and confirmed my progress.

“I am a very curious woman. I said to myself, “I am going to investigate how they are doing this. What makes me feel first the warmth than actual heat emanating from their hands?” I looked under the table, at the ceiling, everywhere. I could find no cords or instruments. Then I thought, “Aha!, they have a battery hidden in their sleeves.” Dr. Hayashi’s assistants wore the Japanese kimono with the long sleeves, which have pockets. They worked silently. There was no talking. My moment came. When I was being treated, I suddenly grabbed the practitioner by the pocket. He was startled, but, thinking I needed some Kleenex, thoughtfully handed me some. I said, “No! I want to see the machine in your pocket.” He burst into uncontrolled laughter. Dr. Hayashi came in to see what the commotion was about, and was told.”

“He smiled and shook his head,” Mrs. Takata recalls. He proceeded to give her the explanation of a Universal Life Force. He said, “Whenever you feel the contact, all I know is that I have reached this great Universal Life Force, and it comes through me to you – these (he held up his hands) — are the electrodes… That force begins to revitalise and restore the balance of your entire system.”

Mrs. Takata nodded, “Yes,” in answer to a query, “Can Reiki help a person who is sincere in a desire to stop drinking to excess, smoking, to lose or gain weight, establish a normal balance of good health?”

In time, Mrs. Takata became convinced that she, too, should learn more and became a student of Dr. Hayashi. She spent months, and was sent into the field to help others. Unbeknownst to her, they made full reports back to Dr. Hayashi. “I passed my examinations perfectly.” Besides the treatments, she adds, there was a matter of special diets, some including sunflower seeds, red beet juice, grapefruit, and almonds.

“I speak with confidence about this” Mrs. Takata notes, “but it should be understood I do not speak as ‘I… I… I…’, I speak because it is of God’s power. He is the one who makes it available to us. Who doubts God?…”

Mrs. Takata is the only teacher of the Usui system of Reiki in the world today and is recognized as its master.”